The 9th edtion of The Festival of (In)appropriation premiered at the Egyptian Theater in Hollywood on February 19, 2017!

Curators Jaimie Baron, Greg Cohen, and Lauren Berliner are delighted to present the latest edition of the Festival of (In)appropriation. Sponsored by Los Angeles Filmforum, the program features an astonishing variety and complexity of moving-image appropriation art, including a rioutous YouTube reaction video mash-up, an exquisite found-footage ready-made, a queer-Asian-American homage to Hollis Frampton, several sublime works of cut-out animation, and a pseudo-documentary (or is it?) about the lost work of an early-Soviet scientist dedicated to the exploration of “human mental projection.”

⇒ HOST THE FEST #9 TRAVELING SHOW AT YOUR VENUE:

Lying Women by Deborah Kelly (Australia, digital video, color, sound 2016, 03:56)
“The stop motion animation Lying Women attends both to printed art’s material qualities and its ideological freight. As a high school student in 70s Melbourne, my primary exposure to art history was through the pages of books. I studied the western canon at a triple remove: as a girl, as an antipodean girl, as an antipodean girl who had never seen the paintings except as printed papers’ cheap approximations of European glory. Lying Women imagines canonical reclining nudes’ escape from centuries of servitude to a worldview in which decorative passivity is their whole purpose. The work proposes a great gathering of queer female energy, a revolution, a collective will to autonomy.” (Deborah Kelly)

Halimuhfack by Christopher Harris (USA, 16mm transferred to digital video, color, sound, 2016, 4:00)
“A performer lip-synchs to archival audio featuring the voice of author and anthropologist Zora Neale Hurston as she describes her method of documenting African American folk songs in Florida. By design, nothing in this film is authentic except the source audio. The flickering images were produced with a hand-cranked Bolex so that the lip-synch is deliberately erratic and the rear projected, grainy, looped images of Masai tribesmen and women recycled from an educational film become increasingly abstract as the audio transforms into an incantation.” (Christopher Harris)

Take Me to Pemberley by Daniela Zahlner (Austria, digital video, color, sound, 2015, 02:00)
“Mr. Darcy: The synonym for the romantic hero since 1813, as he first appeared in Jane Austen‘s novel Pride and Prejudice. The book had several movie adaptations (especially prominent [were those from] 1940, 1995 and 2005), which not only inscribe Darcy’s character in popular culture, but also illustrate our capitalist notions of love and desire, as well as a wish for escapism into a pre-industrialized, pre-virtualized world. I, too, fell for Mr. Darcy. Thanks to my webcam and Photo Booth, I can finally have my go [at] winning him over.” (Daniela Zahlner)

Actual Case History by Tony Gault (US, 16mm transferred to digital video, color, sound, 2015, 09:00)
“Rotoscope animation reshapes a found film into an examination of ‘the vague, indefinite fears which keep growing in our minds.’” (Tony Gault) 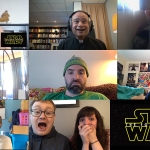 Official Teaser #2 Reaction!!! by Kevin McCarthy (US, digital video, color, sound, 2016, 6:30)
“When the second teaser for THE FORCE AWAKENS comes out, a STAR WARS agnostic tries in vain to embrace the zeitgeist, joining superfans to create his own lukewarm trailer reaction video mashup.” (Kevin McCarthy)

Sneeze by Yunjin Woo (USA, 16mm/found footage transferred to digital video, color, sound, 2015, 05:11)
“Sneeze explores the stigmatized symptom of common cold—the involuntary expulsion of air and bodily fluid—as an allegory of social ruptures that might mediate infectious resistance. Mixing the Cold War era’s educational film footage promoting personal hygiene as a ‘war against germs’ with images of explosive creation, this film aesthetically subverts the uniquely modern fantasy of separation and isolation of the ‘healthy’ from the ‘ill’.” (Yunjin Woo)

A Place I’ve Never Been by Adrian Flury  (Switzerland, digital video, color, sound, 2015, 04:40)
“By sourcing multiple digital images of the same place from different archives, this experiment in film makes use of frame by frame montage to discover hidden forms, patterns and references, thereby giving new meaning to the prevailing redundancy of these pictures.” (Adrian Flury)

Somebody was Trying to Kill Somebody Else by Benjamin Verhoeven (Belgium, digital video, color, sound, 2014, 06:11)
“Part of an ongoing project called Scanning Cinema [that consists] of scanning moving images by using a flatbed scanner and a monitor and putting them back into an animated film. The inversions [produced by this] method (the physical action of scanning) [generate] a new language like a disturbed echo from the photographic reviving of moving images. […] The fragments … used [here] are a re-montage of Michelangelo Antonioni’s Blow-Up, [while] the original soundtrack of Herbie Hancock has undergone the same process as the images. The movie consists of 10,000 scans put together in a stop-motion film.” (Benjamin Verhoeven)

Cut Out by Guli Silberstein (Israel/Palestine, digital video, color, sound, 2014, 04:19)
“A radiant, energetic girl is shouting and punching the empty space in front of her. She is roughly cut out from her surroundings by a computer algorithm struggling to contain her. Her enemies are rubbed off the frame, sound is removed and music added, emphasising her anguish and anger. Is she real? Is she a dream? Gradually, more fragments of the scene are revealed, and the context is made clearer. The video-processing highlights the documented scene as image, both of a fight for freedom, and a media event.” (Guli Silberstein)

Ektoplasmic Vision by Ricardo Salvador (Spain, Super-16mm transferred to digital video, b/w & color, sound, 2016, 09:40)
In 1965, the compendium of an earthly life devoted to scientific research was found in Kresty prison of Leningrad, encrypted in twelve vinyl records printed with stroboscopic images and hypnotic sounds, labeled with the name “HK320.”
Ektoplasmic Vision tells the story of Dr. Joseph H. Stanislaw, a mad scientist of dubious provenance, who claimed to be a Nephilim (half human half demon). During his earthly passage (1888-1944), Dr Stanislaw investigated the human mental projection, and designed his own devices to print and reproduce on “Ektoplasmic film” the images created by the spheres of mind.
Ectoplasmik Vision is the documentary promotion along with the official trailer for Hermetica Komhata HK320, a retro Sci-fi film, 90 minutes long, recently produced by Hermética Films.” (Ricardo Salvador)

The Neutral Zone by LJ Frezza (USA, digital video, color, sound, 2015, 06:40)
“A survey of the utopias featured in Star Trek: The Next Generation (1987-1994). Some of the structures that constrain and produce our understanding of possible futures.” (LJ Frezza)