Premiered September 19, 2010 at the Egyptian Theater in Hollywood

“Against the now undeniable arrival of cinema’s digital future, L.A. Filmforum’s Festival of (In)appropriation goes surprisingly old-school in its found-footage sources and methods. While oddities like Evan Meaney’s image-sound fracturing Ceibas: (we things at play) and Catherine Ross’s clever Pfft. Pfft. Pfft. — a montage of mechanical devices complemented by vocal imitations of their attendant Foley effects — delve into cinema’s usually unnoticed micro-components, a large portion of the festival’s lineup confronts the iconic.
The best among them include Clark Nikolai’s mocking space-age/gay-porn mash-up Galactic Docking Company; Wago Kreider’s violent, Tarnished Angels–Dr. Strangelove aviator cutup, Suspension of Belief, and Kelly Sears’ collage narrative of government wiretapping and subconscious eruption as culled from 1950s industrial films. If none of these exactly rewrites the reappropriation rule book, new paths are intriguingly hinted at: L.J. Frezza’s Nuke Em, Duke says little about its legendary subject not explored in Millions of Dead Cops’s “John Wayne Was a Nazi,” but its layering of excerpts from cancer-causing fiasco The Conqueror and real-life combat footage is uniquely eerie, with images literally and figuratively wiping each other out in shape-shifting digital washes.
Appropriate for a reappropriation series, the burden of the past emerges in an unignorable subtheme: the reimagining of the avant-garde canon. Stuart Sandford’s Blow Job parodies Warhol’s infamous exercise in teasing exhibitionism by looping a suggestive clip of Mark-Paul Gosselaar’s smarmy teen dream Zack Morris — the result is cheaply hilarious.
But by far the most ambitious attempt to take on the classics is Jen Proctor’s A Movie by Jen Proctor, which relates to the first found-footage epic, Bruce Conner’s 1958 A Movie, in the same way Gus Van Sant’s Psycho does to Hitchcock’s masterpiece. Reflecting the present by updating rather than radically altering the content of Conner’s apocalyptic original (Cold War atomic explosions find their equivalent in 9/11), Proctor uses Web video uploads from the Internet to demonstrate how visual media are increasingly transforming our destructive history into a context-free archive that induces nothing less than a numbing, brutalizing eternal present.” 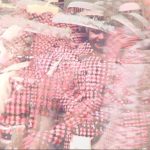 Five-Dimensional Vacation 2 by Ryan Lamb (digital video, color, sound, USA, 2010, 2:01)
“Five-Dimensional Vacation 2 is one in a series of videos exploring time through a visual representation of a five-dimensional time stream.  The video appropriates amateur 8mm film footage found on the web depicting a 1960’s family vacation.  In addition, a musical soundtrack is also utilized (The Smiths, Please, Please, Please Let Me Get What I Want), having been added by an anonymous collaborator who posted the film to the internet.  This source material has been multiplied, offset, and recombined to break with the sequential nature of film and video.  Vacation 2 represents a spatial, rather than a linear, progression in which time is manipulated by allowing each moment in the video to occur and reoccur without end.  The resulting video exists as a continuous whole that can travel across an infinite number of monitors.” (Ryan Lamb)

Voice on the Line by Kelly Sears (digital video, color, sound, USA, 2009, 6:52)
“Voice on the Line is a collage animation made from figures cut out of archival ephemeral films from the late 1950s. This animation mixes the history of these films with events of this era that result in a large-scale secret operation that veers bizarrely off course. The film also reflects on current and troubled relationships between the areas of national security, civil liberties and telephone companies. Voice on the Line explores how technology can be used to shape our fears and desires.” (Kelly Sears) 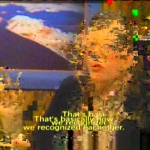 Ceibas: (we things at play) by Evan Meaney (digital video, color, sound, USA, 2010, 3:21)
“We have come to this place of meaning together, celebrating our un-remaindered completeness. Yet, in our wake endures a long procession of stowaways. We celebrate the lineage of our information as we celebrate one another, not realizing that the loudest affirmations might come from these unacknowledged collaborators. With each generation, they say a little bit more, speaking a little bit louder. Now we share more than just our experience, finding the meaning changed through remediative revisions. Finding more where we have come to recognize less. We revisit these evolving states, recounting our stories and theirs a partnership, over and over.” (Evan Meaney)

Nuke Em, Duke by LJ Frezza (digital video, color, sound, USA, 2009, 3:47)
“The film titled The Conqueror starred John Wayne as Genghis Khan. The production took place downwind from a nuclear testing site and close to half the cast and crew developed cancer, including “the Duke” himself. Nuke Em, Duke is a reinterpretation of the film, looking at “conquest” in past and present media, fiction and non-fiction, and the “compression” of these experiences into mediated forms ready for consumption.” (LJ Frezza) 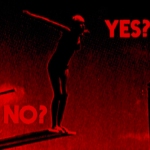 Guttae by Marcin Blajecki (digital video, color, sound, Poland, 2010, 3:00)
“There are some questions that can’t be answered…” (Marcin Blajecki)

Suspension of Belief by Wago Kreider (digital video, b/w & color, sound, USA, 2010, 5:33)
“Radical evasive maneuvers within a virtual reality flight simulator rarely help those who suffer from vertigo. A balanced sense of well-being is unlikely to result from repeated consultation of maps, radar, and similar technological prosthesis. If you suffer from persistent feelings of dislocation, loss of control, dizziness, and a fear of falling, please consult your physician. Partially completed during a media arts residency at the Experimental Television Center in Owego, New York, this flicker-video rapidly intercuts scenes from two classic Hollywood films about men and their flying machines with original documentary imagery shot at the Intrepid Air and Space Museum in Manhattan.” (Wago Kreider)

Pfft..Pfft..Pfft.. by Catherine Ross (digital video, color, sound, USA, 2009, 3:05)
“Sourcing footage from American popular movies of the last two decades, Pfft..Pfft..Pfft.. is a sequence of impossible cause and effect pairings. The improvised Vocal Fx by Adam Matta focus the viewer on the connection between the human and mechanical, while reminding us of the magic in everyday interactions.” (Catherine Ross)

Triptych Unrendered by Antonio Mendoza (digital video, color, sound, 2010, USA, 7:33)
“Triptych Unrendered is the 2010 remix of several video loops from triptych.tv. that have been resequenced by antonio mendoza. triptych.tv is a pirate glitch video anti-blog that is constantly mashed, sampled and maintained by three media artists from three different parts of the world; jimpunk, abe linkoln, and mrtamale. triptych.tv has been active since 2008 and has won new media awards at the Stuttgarter FILMWINTER Festival in Germany, and the Ibiza Biennial in Spain, and the Critical Glitch Artware Festival in the US.” (Antonio Mendoza)

World on Wheels by Tanja Laden (digital video, color, sound, USA, 2008, 2:08)
“Vintage animation from the Prelinger archives (at archive.org) set to music from the Cylinder Preservation and Digitization Project at UCSB.” (Tanja Laden)

A Movie by Jen Proctor by Jennifer Proctor (digital video, color, sound, USA, 2010, 11:47)
“A loving remake of Bruce Conner’s epic 1958 film, A Movie, using online video culled from YouTube and LiveLeak. As a remake, the video provides a parallel narrative that explores the changes in historical and visual icons from 1958 to 2010 – and those images that remain surprisingly, disturbingly, and delightfully the same.” (Jennifer Proctor)

Galactic Docking Company by Clark Nikolai (digital video, color, sound, Canada, 2009, 2:49)
“The commercialization of space causes new discoveries. Using found and original footage shot on Earth and in near Earth orbit, we find that space wants to have an encounter of the most intimate kind.” (Clark Nikolai) 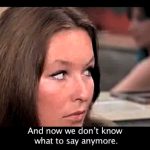 Thoughts by Julian Krubasik (digital video, color, sound, Germany, 2008, 4:51)
“A man gets caught up in his thoughts over a cup of coffee. Homage to Godard’s 2 or 3 things I know about her.” (Julian Krubasik)

The Western Front by Lauren Cook (16mm to digital video, color, sound, USA, 2010, 21:21)
“Three narrators are forced to reconcile experiences of senseless violence and cruelty. By juxtaposing intricately handcrafted images and harsh reality, the film examines what we choose to remember and forget in our own lives.” (Lauren Cook)