Premiered February 15, 2015 at The Egyptian Theater in Hollywood.

Astro Black: Race for Space by Soda_Jerk (digital video, color, sound, Australia, 2010, 6:06)
In their on-going video cycle, Astro Black, Australian duo Soda_Jerk wield their sophisticated techniques of appropriation to probe the cultural theories of Afrofuturism. Presented here is the first episode, Race for Space, which speculates on the alien origins of Sun Ra’s Afrofuturist mythology and the impact of his cosmic jazz on the broader cultural discourses of the space race. Yet, true to the nature of any Soda_Jerk project, nothing is quite as it seems: first, in Chicago in 1936, Sun Ra encounters Morpheus (of Matrix fame); next, Neil Armstrong lands on the moon in 1969, only to find Sun Ra and his Arkestra already there. At stake in Race for Space are the underlying cultural politics of intergalactic exploration, and the nature of “outer space” as both concrete geography and virtual field of possibility.

Demolished Every Second by John Davis (16mm on digital video, color, sound, USA/Tajikistan, 2014, 4:25)
During an artist residency in Dushanbe, Tajikistan, American filmmaker John Davis salvaged film leader from dozens of late Soviet-era educational and propaganda films, making imprints of select portions of this celluloid detritus to use as the raw material for his simple yet elegant work of psycho-tronic visual music. Set to an original minimalist score, Demolished Every Second pays particular attention to the oft-ignored, hand-written or machine-printed artifacts found on film leader, melding them into a pulsating, mesmerizing montage of abstract forms that transcends historical and ideological frontiers.

Sara Nokomis Weir by Brian L. Frye (digital video, color, sound, USA, 2014, 20:00)
A victim impact video is a video intended to demonstrate to a jury the effects of a crime on its victim or—in the case of murder—on those left behind by the deceased. The image track of Frye’s video consists of the victim impact video introduced in the penalty phase of the 1995 trial of Douglas Oliver Kelly, who was accused of murdering 19 year-old Sara Nokomis Weir two years before. The victim impact video compiles snapshots and home videos that convey a poignant sense of Weir’s life and character, now lost to her family and friends. In the guilt phase of the trial, the jury had already convicted Kelly of murdering Weir, and in the penalty phase, the jurors sentenced Kelly to death. Kelly then appealed the death sentence, arguing that the jury should not have been allowed to see the video. In Frye’s film, the images from the victim impact video are accompanied by an audio recording of the California Supreme Court as it deliberates on the admissibility of the video during the appeal. Sara Nokomis Weir thus raises complex questions about the use of recorded images and sounds in the courtroom. While the snapshots and home videos were ostensibly assembled in order to demonstrate the value of Weir’s life, they were also compiled in order to justify another state-sanctioned murder: that of Kelly himself.

Lexicon by Celeste Fichter (digital video, color, silent, USA, 2014, 2:36)
Celeste Fichter amplifies some of the well-known problems with Internet image searching by creating a lexicon of words whose visual “definition” makes sense on the level of the homonym but rarely matches what we expect to see. You’ll never see a zucchini the same way again.

The Bags, Probably 1971 by Joshua Yates (hand-processed 16mm film on video, black & white and color, sound, USA, 2014, 5:11)
In this hand-processed assemblage of previously unearthed home-movie footage and ad hoc audio recordings, Joshua Yates resurrects an American family from the South, to haunting effect. What we hear are snippets of childhood and family life, circa 1971… just enough to disturb us as we attempt to stitch the pieces into a narrative that just won’t completely render. What we see, meanwhile, is a stream of heavily eroded, orphaned small-gauge footage. Every so often from this molten play of surfaces, a human figure or legible sign manages to emerge, for just long enough to stoke our desire for more, before receding again into the decay. In The Bags, Probably 1971, Yates devises a gothic rumination on memory, loss, childhood innocence, the darker side of human nature…  and the inadequacy of hindsight to reconstruct it all.

No Signal Detected by Péter Lichter (digital video, color, sound, Hungary, 2013, 2:33)
An anachronistic eulogy for Bruce Lee? An homage to Bill Morrison? A lament for the unheralded glory of Betamax? Péter Lichter’s compact, mirthful experimental video could be all of these things, though it may just be something else altogether. Any martial arts movie fan will instantly recognize the sounds of Bruce Lee wreaking havoc in Enter the Dragon (1973). To place these scenes visually, however, is a far more difficult proposition, since the appropriated footage here is pocked and mottled by decades of decay. Gradually, even our grasp of the sonic archive falters, as color bars and video blackout signals overtake both image and soundtrack in equal measure. By the end, Lichter has layered loss upon loss upon still more loss, leaving us to question how much more of our film heritage we can stand to sacrifice to death, time, and technological “progress.”

TOHO by Sellotape Cinema (digital video, color, sound, UK, 2013, 9:30)
TOHO emphasizes the mysteries that inhere in found objects, especially audio recordings, about whose original context we know little and cannot find out more. The film derives its title from a word written on a tape cassette player purchased at a flea market by the filmmakers of Sellotape Cinema. On the cassette was an audio letter from a family in Australia to their aunties in England. From clues in the audio, it appears the recording was made in late November 1977, but nothing else is known about the family. The audio recording has been left unaltered but images have been added which approximate certain elements of the recording, producing an oneiric illustration of a personal missive accidentally received by an unintended reader. Sellotape Cinema creates its handmade images on sticky tape a.k.a. sellotape.

Nothing by LJ Frezza (digital video, color, sound, USA, 2014, 6:27)
Nothing consists of every shot from the television series Seinfeld (1989-1998) in which nothing happens. We see buildings, walls, and doors, and—at first—hear the program’s theme music and canned laughter on the soundtrack. In the beginning, this is amusing in the manner of most “supercuts.” However, the repetition of similar images, music, and laughter grows increasingly eerie as characters fail to appear. Eventually, the music and laughter cease altogether, leaving an impression of a New York City devoid of people, empty and abandoned. 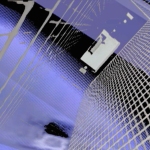 Array by Ben Balcom (digital video, color, sound, USA, 2013, 7:18)
If space, in digital artist Ben Balcom’s words, “is really a bad metaphor for the internet,” then his video Array must surely be understood as a piece of pure visual philosophy. As we float through a highly abstracted digital urban landscape (rendered with images sourced from Google Earth), we may just recognize traces of the streets of Chicago as we listen to an off-screen narration generated from Microsoft’s text-to-speech transcription software. The images of this particular slice of (virtual) Earth, however, have been solarized, pushed to extreme contrast, stripped down to basic shapes and colors. The computer-generated female voice, meanwhile, seems quite literally to speak in code (could it be JavaScript?). The otherworldly result is a sensation of having been transported to a digital parallel universe, where to wander the city is to wonder about the limits of virtual space and to wish for an absolute experience of the virtual realm.

My clothes were dragging me back by Maria Magnusson (digital video, color, sound, Sweden, 2012, 4:53)
In My clothes were dragging me back, Magnusson appropriates sound from Delia Derbyshire’s 1964 BBC radio show, “Inventions for Radio: Dreams.” Stories from dreams about being chased or finding oneself in awkward situations are combined with found footage from a 1968 Teaching Aid film about Toronto children schooled through various experimental pedagogical techniques. Short clips that portray children in different states of mind are slowed down and looped, emphasizing the strangeness of their gestures and expressions. As we listen to recounted dreams and watch children attempting to conform to the desires of adults, our sense of both the boundaries and the authority of the “normal” begin to blur. 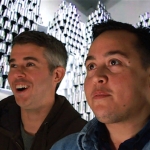 Falling in Love…with Chris and Greg: Work of Art! Reality TV Special by Chris E. Vargas and Greg Youmans (digital video, color, sound, USA, 2012, 14:00)
It’s hard not to fall in love with Chris and Greg, who place themselves as contenders in a remixed, voiced-over version of the reality television show Work of Art: The Next Great Artist. Challenged to “create a successful piece of queer art about failure,” the two present their earnest, conceptual creations about queer life alongside their competitors’ celebrated spectacles of mainstream LGBT politics. Ultimately, their queer art is a failure, and “not in a good way.”

Iterations by Gregg Biermann (digital video, color, sound, USA, 2014, 5:37)
In Iterations, a scene from Hitchcock’s Rear Window (1954) is sliced into nineteen columns, each moving at a slightly different speed, growing progressively faster from left to right. Only at one instant do all nineteen columns briefly align. Rear Window is a film about the desire to see and thereby to understand—or misunderstand. Biermann’s film invites us to experience different instants of the scene simultaneously, invoking our desire for coherence but only briefly allowing for this satisfaction. Like Jimmy Stewart’s character in Rear Window, we are thwarted in our visual desire as our scopophilic satisfaction is deferred.